I inadvertently stumbled into an October tradition tonight. That’s what I get for not calling ahead.

There were small children and large knives involved. There were gooey piles of guts everywhere.

Happily, I managed to wrangle a bag of pumpkin seeds out of the deal which will get roasted sometime tomorrow with a little sea salt and maybe some cumin. Yum.

So, no. I didn’t wander into a human sacrifice. I wandered into pumpkin carving night.

Oh, poor, poor Jack of jack’o’lantern fame. Silly Jack sat down to have a drink with the Devil, but didn’t want to pay for it. Instead, he tricked the Devil into turning himself into a coin with which Jack was supposed to use to pay their tab. Alas, Jack did not. Jack simply slipped the devil-coin into his pocket with a silver cross to keep the Devil from returning to his true form.

Eventually, Jack turned him loose with the agreement that the Devil wouldn’t claim Jack’s soul for a year. This went on for several years and each time the Devil came to visit Jack, Jack would find a way to trick him and buy himself another year.

But the day came when Jack did die and when he arrived at the pearly gates, Heaven wouldn’t let him in. So, Jack went to call on his old friend the Devil. After years and years of being tricked by Jack, the Devil had decided that Jack’s soul probably would be even more trouble than Jack had ever been and refused him entrance into Hell. But, because they’d been friends so long, the Devil gave Jack a burning coal to light his way through the veiled afterlife.

Jack carved out a turnip and dropped the coal inside and there was the very first jack’o’lantern.

Yes, a turnip. And you think carving pumpkins is hard. 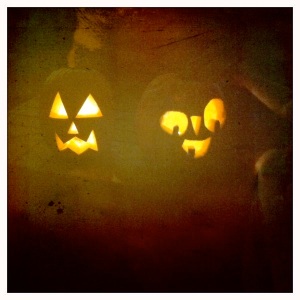